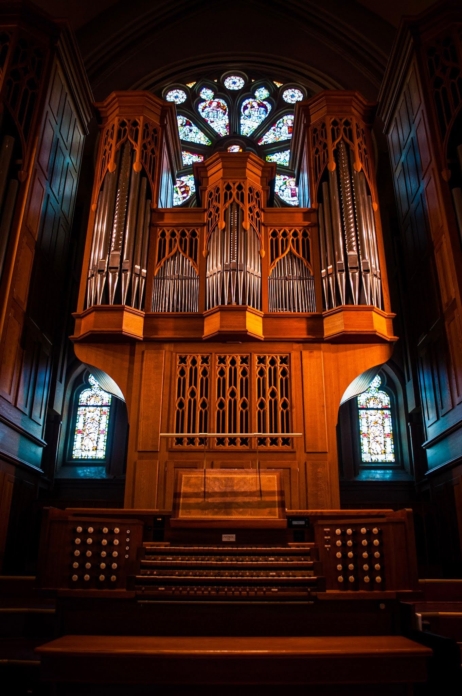 The first recorded organ at the Cathedral was a Henry Erben purchased some time in the mid 1830’s. Erben’s opus list shows an organ built for St. John’s Catholic Church in 1834. A Savannah newspaper, The Georgian, contains several articles in 1836 regarding the raising of money for an organ for the Catholic church:

The Georgian reported again the next year about the organ: April 27, 1837: “The Ladies of the Roman Catholic Fair, respectfully inform the Citizens of Savannah, that the organ purchased with the proceeds of the same, is now completed. Professors, Amateurs, and the public generally, are invited to attend at the Roman Catholic Church this afternoon at 4 o’clock, for the purpose of testing the quality of the instrument.” No existing copy of the contract with the Erben company is known. However, when St. John’s Catholic church purchased another organ, the Erben was given to the First African Baptist Church where it still resides. It is no longer playable, all the interior metal pipes on the windchest have been removed. Only the organ case, the façade pipes and the wood pipes remain. Erben Organ, 1836 Pedals (left) Trumpet Cornet III Fifteenth Bass Principal Bass Stopped Diapason Bass Great (right) Stopped Diapason Open Diapason Principal Fifteenth Dulciana Flute Static wind pressure at blower – 3 ½ in. Single manual – Compass 53 notes Pedal couples by pulldowns from the manual keyboard In 1850, the church became a cathedral when the new Diocese of Savannah established its seat here. Then in 1856, a larger organ was desired and the church purchased the Goodrich organ built in 1820 for use by the Independent Presbyterian Church. This organ had been damaged in a hurricane in 1854. When Independent Presbyterian contracted with the Knauff Organ company for a new instrument, they sold the Goodrich to Mr. Knauff for $400. The organ was then rebuilt and sold to St. John’s. The Goodrich continued in use until 1898 when it was destroyed in a fire. A new cathedral, built in 1876 at Abercorn and Harris Streets, remained incomplete until 1896 when the two spires were added. Unfortunately, on Sunday evening, February 6, 1898, sometime between 10 pm and 11 pm, the cathedral caught fire and was almost destroyed. The Savannah Morning News reported: “The Cathedral of Saint John the Baptist, one of the most magnificent and imposing structures of savannah, upon which years of toil and thousands of dollars have been spent, is a mass of ruin, and nothing remains but its four walls and the indestructible parts of its tow tall spires. The conflagration that swept it away before the hour of midnight was frightful in its grandeur and pitiable in its magnificence. It seemed toblot out in a moment the work of years….” Minutes of a finance committee for the rebuilding of the Cathedral, dated November 17, 1899, show an smount due for a new organ to be $7,500. These records contain a copy of a letter to John Brown, organ builder from Wilmington Delaware, dated January 17, 1900. “Dear Mr. Brown: Will you please send me specifications for an organ to cost about $7500 giving full details as far as practicable. Also, your judgment as to motor and if you decide on water, what size supply pipe we would use, as we would like to bring in pipe now before work is completed, so that pipe can be concealed. You know my individual preference in all this matter. With kind remembrance to your brother, I am sincerely yours, Benj. J. Keiley, Rector” The new cathedral was dedicated on Sunday morning, October 28, 1900. Church records state that a choir of 60 voices sang under the direction of F.E. Rebarerm and was supported by a 12 piece orchestra and a great organ (presumably the John Brown). In a church publication dated 1902, there is a photo of the Brown organ showing trumpet pipes arranged in Jardine style. In 1912, the John Brown was converted to electric action and continued to be used until 1938, when it was considered unplayable and dismantled. Some of the pipes ended up as demonstrators in a physics class at Savannah High School. Mr. William B. Clarke Jr. saw them there in 1941. The John Brown organ was replaced by a Hammond and followed by a Baldwin in the 1950’s. By 1981, the church was in need of serious structural repair. Receding groundwater had weakened the timber foundation and the decision was made to restore the church to its 1912 condition. At the same time, it was decided to purchase a new pipe organ for the Cathedral. Dr. J Harry Persse, former head of the Music Department at Armstrong State University, assembled a committee to decide on a new organ. Dr. Persse enlisted the aid of William B. Clarke, Jr., who advised the committee to choose a prominent musician in the Catholic Church as the official consultant. The committee selected Richard Proulex in Chicago, who accepted the position. Mr. Clarke sat in on many meetings, assembling a list of suitable organ builders, and assisting in drawing up the final contract. The committee chose the Noack Company of Massachusetts as the builders. The committee members were familiar with the Noack recently installed at Wesley Monumental Church. Mr. Clarke’s involvement with this contract marked the first time in Savannah that a Protestant was allowed to participate in such proceedings. In 1991, after the installation of the new organ, the choir from Mr. Clarke’s church, St. Paul’s Lutheran Church, was the first Protestant choir to present a choir and organ concert at the Cathedral. This concert was directed by Steven Branyon.