Healing of the Sick

Jesus said to the Pharisees: "There was a rich man who dressed in purple garments and fine linen and dined sumptuously each day. And lying at his door was a poor man named Lazarus, covered with sores, who would gladly have eaten his fill of the scraps that fell from the rich man's table. Dogs Read More

Healing of the Sick

It is clear from the Gospels that an essential element of the ministry of Jesus Christ was healing those who were sick and afflicted. The miracles that he worked on behalf of the blind, the crippled, the sick, and the disturbed were signs of the Kingdom of God which had begun in Jesus.

The Church continues that work of healing and care for the sick today, through the Sacrament of the Anointing of the Sick. Previously known as “Extreme Unction” or the last anointing, this Sacrament is not only for those at the point of death, but for any baptized person (ordinarily a Catholic) who suffers from a serious illness. The Anointing of the Sick may be repeated if the sick person recovers but becomes ill again, or if, during the same illness, the person’s condition becomes more serious. A person should be anointed before surgery when a dangerous illness is the reason for the intervention. In addition, elderly people may be anointed if they are in weak condition even though no dangerous illness is present. Sick children may be anointed if they have sufficient use of reason to be comforted by the sacrament.

In order to receive the Sacrament of the Anointing of the Sick, a person or family member should request it from the Church. When a member of the Cathedral Parish is in the hospital, or experiencing a serious illness at home, someone should call the Church office or one of the Priests directly and make the situation known.

For those who are about to depart from this life, the Church offers “the last rites” which consists of the opportunity for Confession of sins, the Anointing of the Sick, and the reception of the Eucharist, which is know in this case as “Viaticum,” or food for the journey. These are the sacraments that prepare us for our heavenly homeland. For more information, call the Church office at 912-233-4709 or click here 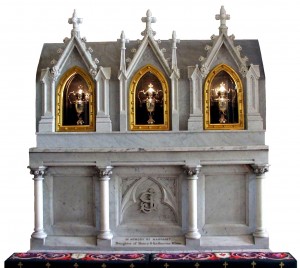